My faithful assistant Taby told me I needed a short bio, so here goes.  My name is Mark Pescatrice and I am an automated trading system developer, systematic trader, analyst, and CEO of a couple companies (it is not as glamorous as it sounds… I am also the janitor of said companies).
I consider myself a classic Renaissance man, having specialized knowledge in several different areas, which I believe helps me on my systems trading journey.  I am insanely curious. I am still relatively new to systematic trading and I have a ton to learn, which is partly why I launched this site.

If you want to know how I became a systematic trader, take a look at the timeline below. 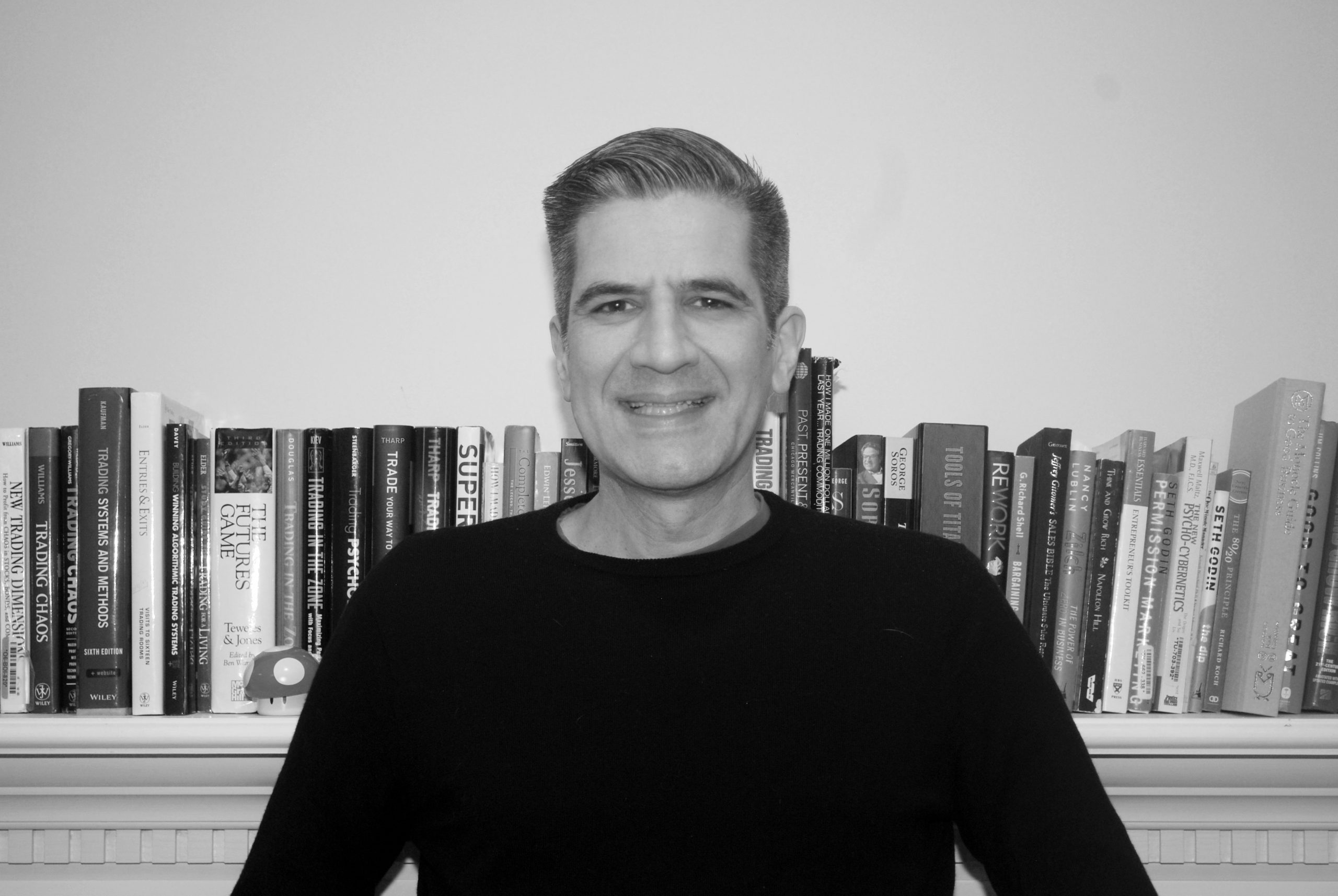 I teach myself BASIC programming, without a computer, emulating program results on paper.  This becomes the foundation of my algorithmic trading system development skill set.

I won a stock trading competition in a high school business class by picking a stock I had been following for about a year.  It went from $.75 to $1.25, a 66% return over several months. Others in the class lost by selecting blue-chips recommended by their parents.

I “played” the video game, Hamurabi, by obsessively walking through the BASIC code over and over on paper, as I did not have a computer yet.  This was my rudimentary introduction to grains commodity trading.  Many villagers died.

The proud owner of a new computer, I played a game, Taipan! , in which I am a trader in the Far East during the mid-19th century.  I traded in silk, opium, weapons, and general cargo, while avoiding or battling pirates.  This was my first experience trading in a simulated environment, with plenty of risks and rewards.  The algorithmic patterns in the game’s code would begin to emerge after I played the game hundreds of times, making it easier to trade and avoid getting destroyed by pirates.  Thankfully, I did not use this experience to get a job running guns or trafficking illicit drugs.

My trading experience at this point was limited to an employee stock purchase plan, while working for a DJIA 30 company.  I was a part owner of a multi-national corporation!  I did not have a huge investment or return when I cashed out, but for a poor kid from Akron, Ohio, it was pretty darn good.

I bought Ken Robert’s The World’s Most Powerful Money Manual (TWMPMM) for $175 ($282 in 2020, adjusted for inflation) after seeing his classified ads in Popular Science Magazine for years.  I learned about futures and options and picked up some bad trading advice.

Fool around with equities trading for a while and make some money on bargain-bin stocks with great upside potential.

Lost about 75% in the value of my 401(k) through employee stock purchases, as the share price of the telecommunications infrastructure company I worked for crashed in the dot-com bubble.  This was the worst trading loss of my life, by far.  I quit my company over a pay equity issue, liquidated my 401(k), and started a consulting company.

Opened and managed education accounts for my kids, but was unhappy with the analysis tools needed to trade effectively.  Took advantage of the recovery after the financial crisis of 2008-2009.

I revisited trading, starting with Track ‘n Trade software and the writings of Alexander Elder, Jim Rogers, and George Kleinman.  My education moves along slowly, as my consulting business booms.  My wife carries the trading torch for a while.

We became miners, 49-ers, of the crypto variety, as Bitcoin passes $100.  I trade/exchange Litecoin and Bitcoin on BTC-e and Mt. Gox, two notorious and defunct crypto currency exchanges.  I did not realize it at the time, but I was successfully arbitrage trading Litecoin and Bitcoin by sheer dumb luck.  We lose nothing when BTC-e was shut down but got stuck in digital asset limbo when Mt. Gox got into trouble and went dark.  We have Bitcoin…. somewhere in Japan.  This was our first loss related to a broker/exchange failure.

I eased back into trading, learning everything I could about trading that I did not know already, especially automated trading on TradeStation’s platform. I join the Futures.io community.

Continued forward with building automated trading systems, building some of the most beautifully overfit and epically back-tested systems in the history of automated trading.  In other words, bad systems.  Thankfully, no strategies went live and all of them bombed in simulated trading.  My EasyLanguage coding skills improve.  I get into John Ehler’s writings (digital signal processing and cycle analytics) in a big way, even though I do not understand it all.

I start journaling at Futures.io (FIO) and try to crack the Dow E-Mini code.  I did not realize it at the time, but I was rapidly evolving into a fully automated trader.  I start another journal to chronicle my automated trading system development adventures: Attack of the Robots – An Algo Journal I read Kevin Davey’s book, Building Winning Algorithmic Trading Systems and it transforms my trading system development forever.  I admit that the more I learn, the more I do not know.

On the recommendation of a Futures.io member, I take Kevin Davey’s Strategy Factory Workshop , and all the pieces start to fall into place.  I commence build trading systems, ignore the best practices of system development that I learned, and pay the price.  I then return to the best practices I learned and amazingly, things work again.  I learn a lot from Perry Kaufman, Linda Bradford-Raschke, and others.

I start diving into diversification and portfolio building.  I outgrow my FIO algo journal.  Everything in this timeline has brought me to this point.  I launch this website.

Make no mistake: I am no expert.  10 years from now, maybe you can call me an expert.  I live by this mantra:

Join me on this journey as I go through the process of building algorithmic trading systems.

We use cookies on our website to give you the most relevant experience by remembering your preferences and repeat visits. By clicking “Accept”, you consent to the use of ALL the cookies.
Do not sell my personal information.
Read MoreACCEPT
Manage consent

This website uses cookies to improve your experience while you navigate through the website. Out of these, the cookies that are categorized as necessary are stored on your browser as they are essential for the working of basic functionalities of the website. We also use third-party cookies that help us analyze and understand how you use this website. These cookies will be stored in your browser only with your consent. You also have the option to opt-out of these cookies. But opting out of some of these cookies may affect your browsing experience.
Necessary Always Enabled
Necessary cookies are absolutely essential for the website to function properly. This category only includes cookies that ensures basic functionalities and security features of the website. These cookies do not store any personal information.
Non-necessary
Any cookies that may not be particularly necessary for the website to function and is used specifically to collect user personal data via analytics, ads, other embedded contents are termed as non-necessary cookies. It is mandatory to procure user consent prior to running these cookies on your website.
SAVE & ACCEPT